This lineup includes some games with customized backglasses. Bally’s great Eight Ball Deluxe is among those set on 2-quarter play. A few older mechanical pins are on quarter play.

What’s better than baseball, hot dogs and apple pie? How about hot dogs, cold beer and…pinball? Those three ingredients have added up to success for an Eagle Rock, Calif., hotspot called Walt’s Bar. Opened about four years ago by a pinball fanatic named Jeff Johnsen in a former ice cream parlor, the place offers around a dozen brands of beer (and the pretzels that go with it), as well as some of the best wienies this side of Germany. 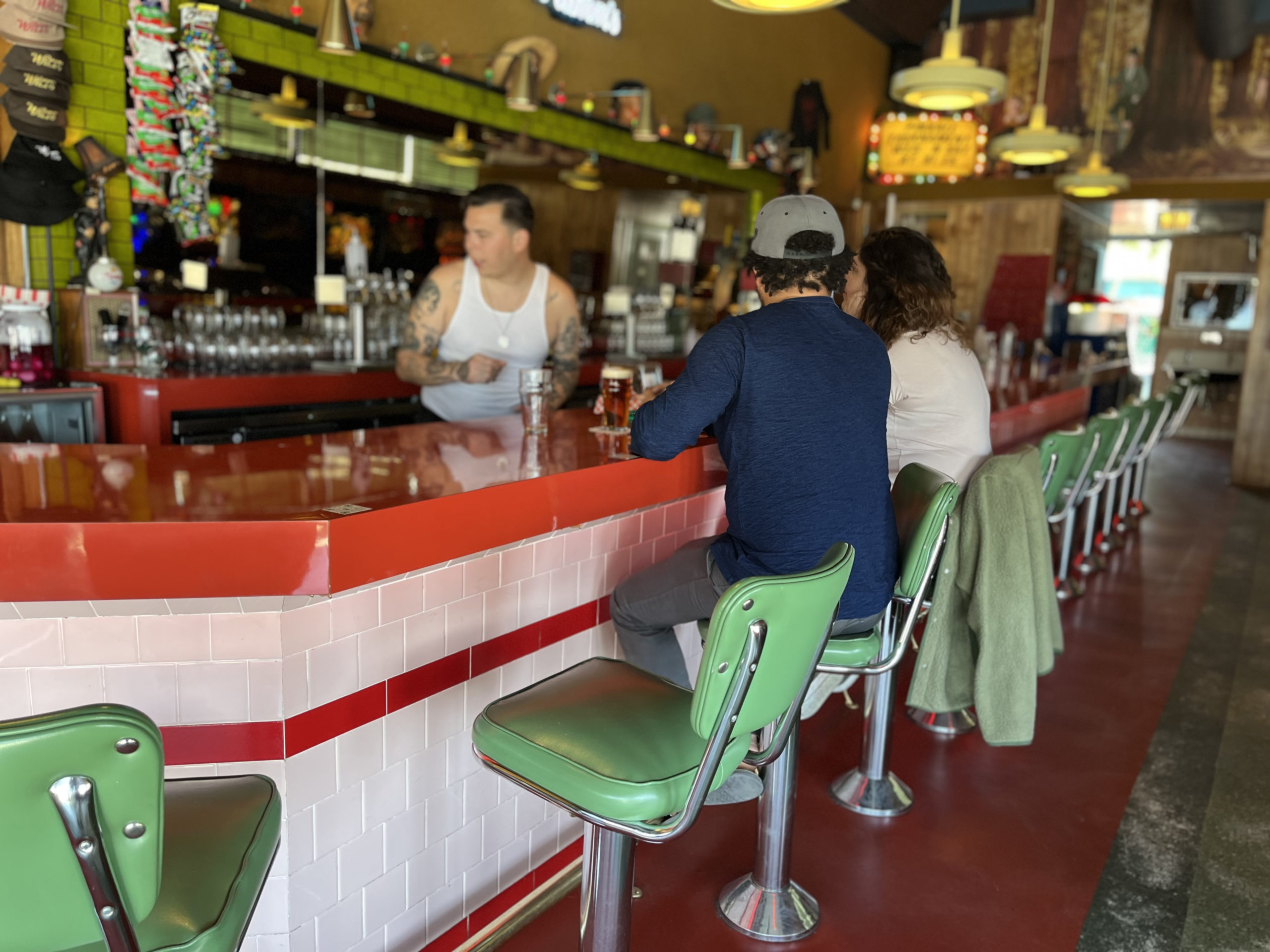 Tyler Jimenez waits on a couple of folks who came in for lunch.

The cream on this cake, however, comes from a lineup of reconditioned flipper games located along a wall about a half dozen steps opposite the bar. All except three operate on 50-cent play and on a busy Friday night, the “music” from the games combined with the increasingly loud outbursts from the players can be heard from the moon.

Walt’s Bar is located nearby Barack Obama’s alma mater Occidental College in the foothills of the San Gabriel Mountains at 4680 Eagle Rock Boulevard. It may be named “Walt’s” after Jeff’s dad, but the biggest word over the front door is “PINBALL!” which can be seen for blocks and blocks, especially at night when it’s all lit up in colorful neon.

According to Stephanie Breijo, who produced a gorgeous photo feature on this “ginmill without the gin” when it originally opened for Time Out Magazine, Walt Johnsen first ignited the passion for pins in sons Jeff and Brad when he brought home an old electro-mechanical Surf Champ for them to fool around with when they were youngsters.

Stephanie says both brothers fell in love with the insides and outsides of that machine and the rest is history. (Brad runs his Add-A-Ball bar up in Seattle with, naturally, a big lineup of games just like in Walt’s.) Both brothers clearly know how to refurb an old pin table to look pretty much like brand new. They and their friend Travis Echert have a collection of refurbished pins at their homes from which they draw fresh games for the bar, just like operators rotating games in and out.

Back at Walt’s, a mid-week pinball tournament is held most Wednesdays, and a bulletin board displays high scores to further encourage competition (and quarters). Thanks to California’s warm weather, as well as to old Covid restrictions, folks can eat on the outside patio as well as inside where the games are doing their thing. It’s just all a great place to be.