Trending
You are at:Home»Current Issue»Cover Story»JET – Jennison Entertainment Technologies – May 2016 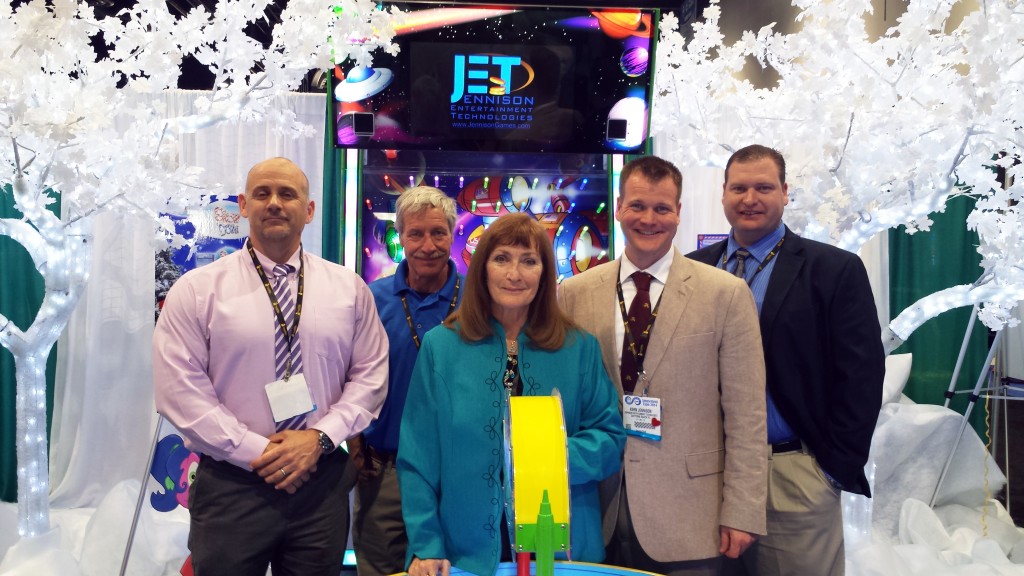 Bittersweet: This Jennison family picture from the 2014 Amusement Expo features Kern and Justin’s late mother, Cheri. Her presence in their lives and business is missed daily, but is also a continual inspiration to push foward and always work hard. With her are Jason, father Dean, Kern and Justin. The Jennison brothers attribute a lot of their own success to the way their parents raised them. They were told that nothing is impossible, and set their sights high because of it.

Jennison Bros. Soar Into 10th Anniversary of Designing Without Limits

The ideas behind Justin and Kern Jennison’s games don’t come from where you’d expect. They take their Disney-inspired company motto to heart, believing, “If you can dream it, you can do it.” These words are written in the Jennison Entertain­ment Technologies office in Daytona Beach, Fla., and in their factory in China; they serve as a reminder that the idea for the company’s next big game can come from anywhere and everywhere. Whether a desktop snow globe inspires their next game –– Snow Down –– or it comes in between watching a performance of Cirque du Soleil’s KA show  –– Space Ballz –– JET’s innovation is rooted in a sense that embracing uniqueness is profitable, and the hard road is often the best road.

Since 2007, the company has grown into a well-known and respected part of the coin-op industry. They’re gearing up for another successful year with several milestones at their feet: The company will be bringing the largest release of games they’ve had to date to IAAPA this fall for their 10th year displaying at that show where both Kern and Justin –– COO and CEO respectively –– will be celebrating their 20th anniversary in the industry. On a normal year, the company brings one or two new products to the IAAPA show. However, they have four new pieces planned for the 2016 expo – three novelty redemption games and a merchandiser.

“Merchandisers have been around for a few years, but a lot of the ideas out there have gotten similar in nature,” Justin said. “What we do as a company is look for the unique angle that no one else has seen, and build to that with an extreme focus on quality and control.”

That’s not all the company is doing: JET is also working on two licenses for video game concepts they plan to release in 2017. Despite the softened market for video games in today’s arcade world, the brothers believe the more they can diversify the company’s product line, the more resilient and profitable it will be. They also think that reticence from some other manufacturers to pursue video has left a hole in the industry’s offerings that they hope to capitalize on.

“A lot of the major manufacturers have moved away from video because that used to be their sole source of income. We have been looking to add video in order to add to our offerings,” Kern Jennison said. “We want to be a one-stop shop for operators. Plus, even if these new products don’t penetrate the entire U.S. market, video is still doing very well internationally.”

The company has strong connections overseas, operating about 70 percent of their business in the U.S. and 30 percent elsewhere, including through an exclusive distribution deal with Bandai Namco, which sells their games in Europe, Russia and the Middle East.

JET does the majority of its manufacturing overseas as well, in the aforementioned Chinese factory. They plan on moving some of their manufacturing stateside, though, and recently built a few of their Power Pong games in Daytona Beach to study the feasibility of U.S. production. The JET team at this year’s Nightclub & Bar where they highlighted their new Power Pong game. This coin-op beer-pong table houses cups in its surface and dispenses balls for a two-person faceoff. From left to right, Dean, Bobby Mellor, Kern, John Brennan, Ryan Wyland and Justin.

Unlike some larger corporations looking to outsource and keep their bottom line as low as possible, JET maintains direct oversight of the factory. Kern –– who was in China while RePlay prepped this story – has a strong understanding of local culture, allowing him to work with the multiple Asian component suppliers and ensure high quality parts and assembly on JET’s games.

“I don’t think any of our competitors have as close a watch on their overseas investments as we do. We actually maintain the factory; we are invested in our labor source and equipment,” Kern said. “A lot of times what’s happening with competitors in China is they’ll come here looking for a concept, actually take that game, put their own graphics on it, put their own logo on it and call it their own product. That’s one thing we will not do,” he declared.

JET is dedicated to the idea that every game should have a story. Every one of the characters found throughout their products are fondly named after their family members, and every game is built from the ground up, taking the most basic concepts to whiteboard and then to the factory.

“Sometimes, I’d say we actually put too much thought into the games,” Kern said. “We put months into designing the graphics, and on the trade show floor that’s awesome. But oftentimes these games just get shoved side-by-side in a dimly lit room where no one sees the work. Regardless, we try and continue that extensive design, even though on about 80 percent of the other products you’ll see out there there’s only a logo or a single character on the front of the game.”

The Jennison brothers think that the small, efficient nature of their company allows them to take the time necessary to create what they believe is quality. They focus on trends in the coin-op world and aim to diversify their company to meet those trends, no matter if new products require them to take a risk and try their luck.

“Most manufacturers feel required to sell 1,000-plus pieces to call it a success. We don’t have to do that. We have our own knowledge and money saving capabilities that allow us to shoot for a lower target,” Justin said. “These two video game licenses we’re working on may be a risk… they’re not your typical driver or shooter, but we think that innovation requires risk.” Another concept that has stuck firmly in the minds of JET’s leaders is loyalty to the distributor/manufacturer relationship. “Despite the fact that a lot of other companies will sell products directly to customers, we believe that without distributors, the company wouldn’t be as successful as it is today,” Kern said. They further credit Betson, the vision of both President/ CFO Bob Geschine and Exec VP Bob Boals, and the former exclusive relationship between the two companies for part of their successes.

“We will lose a sale before we turn on one of our distributors or someone who’s with us,” Kern said. “That sale may never get completed, we may lose out on some quick cash, but we’re true and loyal. We built our company on honesty We never knew what to expect, but that single idea has worked for the last 20 years and will hopefully work for 20 more.”

Both Justin and Kern express hope for the future, as new technology brings players into more interactive situations and the FEC market continues to grow. As the industry shifts gears and focuses on that market, JET shifts as well, diversifying their products and offering the A+ games they produce.

“It is very difficult to compete with large competitors as far as the amount of products we can produce a year, but we know ours are quality and we will continue focusing on the FEC market and other facets of the industry,” Justin said.

Both brothers expressed doubts and fears about several trends they’ve noticed in the past few years, though. They believe that people are continually demanding higher revenue machines, insisting on ROIs that were once thought unrealistic. They think this has resulted in new machines that have lost the “play” aspect that used to drive the industry.

“Our company tries to stay ahead of change, but one thing I have noticed is a move toward games with a higher element of chance than the true presence of skill. We work and will continue to work very hard to create a real game, something the customer enjoys, not something where they just push a button and get instant gratification. At the end of the day, they’re not playing anything,” Justin said.

“We try to stick with our roots, designing games that are fun and bring enjoyment to people. We spend effort to design systems in the games that you don’t even have to put money in to enjoy,” Kern continued. “We want people to become part of the game, and if you can lure them in with something fun, maybe they’ll throw a quarter or two in it.”

Sadly, JET hasn’t been treated solely to smooth sailing in the past few years. Cheri Jennison, Kern and Justin’s mother and the heart and soul of JET, unexpectedly passed away in December 2014. Cheri was known throughout the amusement world as the friendliest face in the JET show booth, but she was much more than just the company’s event coordinator.

“She was the center of the company and the center of the family. From game design input to planning the next company trip, there wasn’t anything we did on a daily basis that she wasn’t a part of. Her loss is a void that will never be filled,” Justin said.

“She was always our frontrunner at the shows. We would be busy with business, showing the fruits of our labor, and she was always in the background reminding everyone who we are and that we cared greatly about the community and industry we found ourselves in. Having her gone not only was a shock when it happened, but continues to affect us all daily,” Kern said. “We take pride and work harder knowing that she definitely wanted us to succeed.”

Despite the loss, JET keeps moving forward, designing with a more diverse, fun-filled industry in mind. Both Kern and Justin refuse to believe in the impossible, and instead find new ideas that manifest themselves in arcade and redemption games in their dazzling cabinets.

“We were never told growing up that anything is impossible, regardless of what stupid idea we may have had,” Justin said. “This business, in my opinion, is great not only because of our relationships with customers, distributors and others in the industry, but because our parents instilled in us the idea that we could make anything great. No business is easy, especially in this industry, but our parents were always there every time it got tough.”