A Smart Vision for the Future

With chart-topping cranes like Ticket Time and The Giant, plus new self-merchandisers Magic Coin and Mega Prize, Iowa-based Smart Industries always aims to be ahead of the industry curve.

Company president Jeff Smart says new machines coming up later this year (possibly in time for IAAPA) are “innovative ideas” that are “going to change the crane industry entirely.”

That’s always been on the agenda, Smart said. His father, Gordon Smart, who founded the business, ingrained that into him. “It’s all about changing and adapting with the times. He was always about that.”

Gordon first got into the industry with his wife, Lavonne, back in the late 1960s. The pair met when Gordon was a barber and Lavonne was a beautician. They always had an entrepreneurial spirit, Jeff said, and had early endeavors like real estate and selling coloring books at the Iowa State Fair. The latter ended up drawing his interest in handwriting analysis machines, which he would go on to start building and selling by the early 1970s.

“I’d be working with him at 7- or 8-years-old building trailers,” Jeff said. The machines would be hauled to county fairs all year round. At the peak of that business, there were about 10 agents traveling around the country doing those fairs with the Smarts. The next step that would bring the family closer to the amusement business was manufacturing foosball tables, which also began in the early ’70s.

During that period, Gordon and Jeff, who was around 16 at the time, discovered Central Distributing and met with Lou Singer, who supplied the pair a semi-truckload of machines.

“We went to the first fair we could with our arcade games,” Smart said. “That was our introduction to the coin-op industry.” 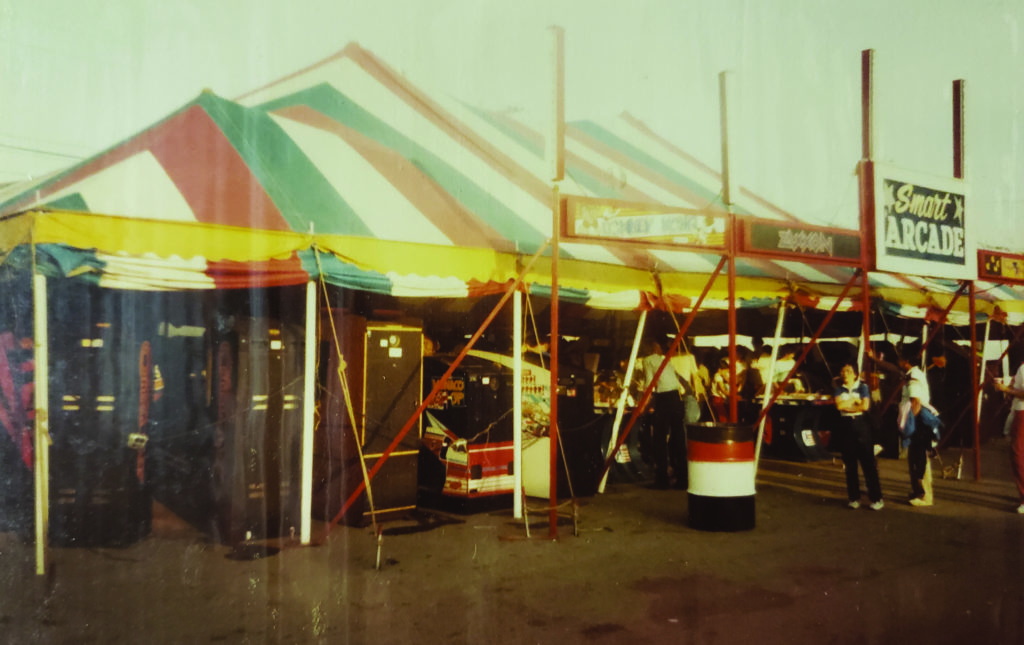 At the peak of Smart’s traveling arcade business, there were about 10 agents traveling around the country setting up at state fairs.

By the time he graduated high school in 1975, they were traveling to four big Canadian fairs and eight state fairs in the U.S. annually with four semis and 100 total games. The traveling arcade was doing quite well, so they also developed a street route that included Adventure­land Amusement Park, which opened in 1974 and is still open today.

They incorporated in 1979 (they were Smart Enterprises before becoming Smart Industries), which is why they’re celebrating their 40th year here in 2019.

The Smarts continued with their traveling arcade business through the mid-1980s. It was during that time when the video game industry started drying up and they needed something new to recoup money.

“Our traveling arcade revenues dropped off severely,” he said. “Close to 60 percent.”

Smart recalled a change at the 1985 Iowa State Fair that would reroute the business for long-term success: “Gordon got a call from one of his friends about a coin-op game sold by Betson called Big Choice Crane, a 3-player crane. It was making all kinds of money and we hadn’t even known about it. We got one of those machines and put it in our arcade. That machine did 90 percent of our revenue that day at the Iowa State Fair.”

That was in August that year, and Jeff went on to finish out state fairs through October, he said. The success of that game prompted Gordon to manufacture his own crane, which he began to do that winter. That crane was Bear Claw, which released in 1985.

“Our carnival friends were finding out through the grapevine that we were building this crane,” Smart noted. They showed it at a Florida trade show the following spring. “We used all the money we had. We borrowed every cent we had to get down to this show, and came back with $150,000 in deposits.” (And more than $1 million worth of equipment sold, according to the Des Moines Register.)

The growth was quick and substantial. “We went from three to four people manufacturing in a 4,000-sq.-ft. facility to 250 people in a 50,000-sq.-ft. facility within probably four to five months,” Smart remembered. “We had to learn on the go. From that, we just started growing and adding more products to our crane line.” Bear Claw was followed up by the revolutionary Clean Sweep crane in 1987. Jim Dupree, now Smart’s vice president, said it was the first joystick to be used on a crane, an idea Gordon Smart originated that’s now the industry standard.

He also noted the Smart Ticket Center, developed in 1994, was a “well-recognized industry innovation” where players could redeem their own tickets. A self-contained prize redemption center was also a part of the company’s ’90s modernizations.

They continue that streak of innovation today with machines like the popular cranes Ticket Time and The Giant, and self-merchandisers Magic Coin and Mega Prize.

“We’re in a good spot right now,” Dupree said. “We’ve been in the top of the equipment polls with our products and have had great success with our ticket cranes.” He mentioned worldwide patents on Ticket Time and other concepts are “very important in today’s market,” and has helped the company thrive.

“We were able to adapt the crane mechanism and turn it into a massive success as a redemption product,” Dupree said about the 2016 release of Ticket Time. “We made it mainstream, and now it’s an industry standard.” That continued with the follow-up success had by The Giant and The Giant Taj Mahal. Ticket Ring has a similar story… “That today is the most successful ROI on any game ever,” he claimed. The newest Smart product, Mega Prize, had its public debut at Amusement Expo this spring. It can hold massive 40” toys.

The technology and product presentation continue to evolve, and it is Smart’s goal to be at the forefront of the change.

“I think we’ve been ahead of the curve,” Dupree said. “We’re looking to introduce even more technologies that haven’t been seen before on the amusement side.” The latest technical innovation was the Ticket Time RX system, which features an automatic reload. That means no more manually reloading ticket rolls for operators. (A video and more details are available at www.smartind.com/tickettime-rx.html.)

“This industry is about being able to adapt to the needs of the time and the moment,” he explained. “We have a staff here with a lot of experience.”

Smart Industries manufactured its products in its U.S. facility from 1985-2005, and adapted to import opportunities after that. “Today, we ship more games than when we were producing and manufacturing them ourselves,” Dupree said. “Our overseas partnerships help us a lot.”

Smart has about two dozen stateside employees based in Des Moines, Iowa.

Regardless of where the products are manufactured, the company’s focus remains on the customer and their satisfaction. “Our reputation was always number one on the street,” he said. “Our history came from the street and we think about them 100 percent.”

Customers and friends in the FEC world giving feedback and sharing ideas with Smart has kept them at the top of their game.

“I see another 40-year history of strength and growth for Smart Indust­ries. We wouldn’t be here if we didn’t have the trust from the customers.”

Jeff Smart sees that, too, and always remembers to stick to his father’s advice.

“The first thing Gordon told me to do is tell the truth,” Smart said. “If you can’t perform for a customer, get there on time or whatever the situation, the best policy is to tell the truth. People trust us.

“We both learned this together and built this together. Like all fathers and sons, we would butt heads every once and awhile, but we complimented each other very nicely. He was very outgoing and a great salesman. He was a great promoter. I, on the other hand, was good at the designing part, working with the factory people, coming up with new games and concepts.”

With all that experience, growing up in the business and sage advice from Dad, it’s no wonder that Smart has an easygoing view of the future.

“I’ve never worried about what’s coming up next,” Jeff said. “There’s always something new and that’s the most exciting part about this industry. That’s one thing that you can rely on.” “The year was 1986 when I made acquaintance with a colorful, carnival talking, excited entrepreneur with a vision to manufacture crane machines.

“I realized from the start that Gordon Smart was going to become a paradigm shift in my life and a great personal friend. Gordon and his son Jeff, and our rep Mike Smith, did much more than sell me equipment. In the early days, they allowed me to sell toys and equipment in their booth at the trade shows, and continuously provided operator sale leads. Those early years were the ‘Wild West’ of the crane industry.

“Many thanks go out to all my great friends at Smart Industries.” “Smart Industries and Central Distributing have over 50 years of doing business together. Gordon and Jeff always had integrity, combined with a very strong work ethic. When they started expanding into cranes, we were the master distributor for them.

“They were very hard workers and always looking forward. That’s very evident in the product they sell, but also as visionaries in bringing innovative, top-earning machines to the marketplace. We’ve always had admiration for their innovativeness.”