ATV Slam will make its U.S. debut at the Amusement Expo March 27-28 at the Las Vegas Convention Center and manufacturer Sega is “set to impress” with a full range of its video games. 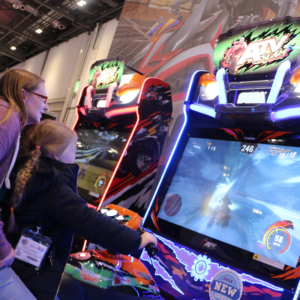 The newest offering is the ATV racing game featuring a life-size realistic quad bike with lit wheels, a chrome engine and all sorts of effects (air cannons for wind, among them). House of the Dead: Scarlet Dawn, Transformers: Shadows Rising, Target Bravo: Operation Ghost, Daytona Championship USA and Storm Racer will all be featured at the trade show. Sega will be located at Booth #201 at the Expo, or you can see more at www.segaarcade.com.