Celebrating its 30th anniversary this year is Andamiro Co. Ltd., a global amusement machine maker based in South Korea. Formed in 1992, originally under the name Oksan Co. Ltd., it became Andamiro in 1998 and opened its U.S. subsidiary, Andamiro USA Corp., in 2000 in Southern California. Today, Andamiro offers premium arcade attractions in most amusement machine categories as it gains market share in the competitive U.S. market. “Before the coronavirus crisis threw the world into chaos, the out-of-home entertainment sector had been on an upward trajectory in 2017 and 2018, holding steady through 2019. Between March and June 2020, however, equipment sales from most amusement factories tumbled 85% or more,” Montano said.

Covid-19 hit Andamiro hard. The start of the pandemic followed the company’s late 2019 release of the Jurassic World redemption game, its second Universal title, and preceded trials for its anticipated Marvel Avengers coin pusher, its first Disney game. In terms of brand profiles, design ingenuity and earnings potential, both games could be considered the company’s greatest achievements.

Back home in South Korea, which was initially praised for its rapid response to the health crisis, Covid dealt a severe blow to the nation’s economy and Andamiro’s overall operations. Amid the turmoil, however, Andamiro and its U.S. division began laying the groundwork for a stronger future.

In late 2019, just three months before the pandemic shut down the world economy, the manufacturer purchased a 25,000-sq.-ft. building in Irving, Texas, and started plans to move its U.S. headquarters from Gardena, Calif., where it had been based for two decades. On the product side, the development of new game concepts continued.

Key members of Andamiro USA’s parts, service and administrative departments relocated with the company, which has since added new staff members to its service, parts and administrative teams. And in June 2021, Andamiro completed its move to the Lone Star State.

“Our relocation plan had been in the works for several years and 2020-2021 turned out to be the right time to execute on it,” said Andamiro USA president Drew Maniscalco. “Being centrally located benefits our ecosystem. Andamiro is now able to invite customers to our building to see new games in person. We have set up a working showroom for our games and our door is open to all.” 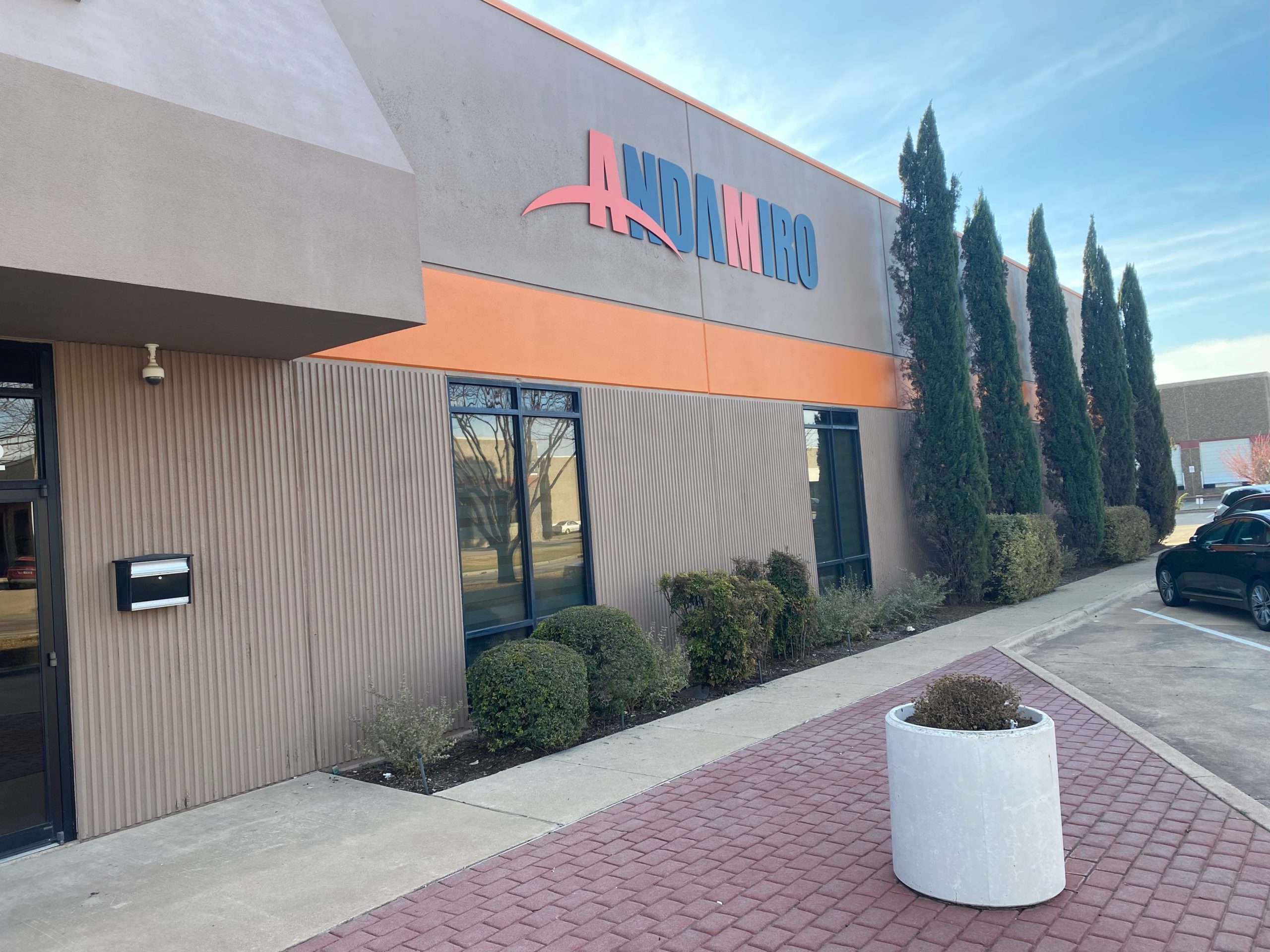 Andamiro USA completed its relocation from Gardena, California, to Irving, Texas, in June 2021. The 25,000-sq.ft. facility houses all departments, including parts, service, warehouse and administration. The address is 2222 Century Circle, Irving, TX 75062.

In addition to moving your team to a new facility during a pandemic and world economic shutdown, try launching your most promising product! That effort might sound irrational, but Andamiro did just that. While some industry pundits warned against it and advised to wait a year, Andamiro began the official rollout of its Avengers coin pusher in September 2020.

“While waiting a year might have been the cautionary approach, we felt the Avengers pusher offered great staying power and long-lasting appeal. Two years after its launch, it is the company’s bestseller – and a top earner for many operators,” said Montano.

Marvel’s most famous superheroes take center stage in the spirited electromechanical amusement device. Avengers delivers a rich arcade experience by combining the Infinity Stones storyline of the blockbuster movies from Marvel Studios with the exciting rapid-fire, token-dropping sights and sounds of a contemporary coin pusher. It is the first arcade title developed under the Andamiro-Disney creative alliance formed in 2019.

“Our goal was to create a unique redemption experience, complemented by beautiful cabinet art that stands out. Our design and engineering teams in South Korea delivered the goods,” Maniscalco said. “Who else can do that on a coin-pusher platform?”

Marvel’s Avengers is one of the biggest superhero franchises of all time, so Andamiro couldn’t resist adding “card play” to its latest licensed game. The in-game pieces comprise nine iconic Marvel characters appearing in the recent Avengers films, and whose comic book fame goes back decades. The eight Avengers in the card series are Black Panther, Captain America, Captain Marvel, Doctor Strange, Hawkeye, Hulk, Iron Man and Thor, along with one supervillain, Thanos, who dons the coveted “rare card.”

Notwithstanding the popularity of collectible redemption cards, not all locations want to handle them. With that in mind, Andamiro offers its two-player Avengers game in a non-card version that provides the same thrills as its card-stacked sibling. And not all locations can accommodate a two-player, 6-ft. wide deluxe game (and price tag), so Andamiro put Avengers in its first single-player 3-ft.-wide pusher cabinet. Boasting the same ticket-awarding gizmos featured in the two-player deluxe unit, the one-player Avengers sells in a card and noncard version, too.

The adaptation of intellectual propriety to arcade gaming is one of the driving forces behind Andamiro’s corporate organization and design culture. The company continues to invest heavily in the licensing of intellectual property. As a result, Andamiro has built one of the largest portfolios of licensed titles in today’s amusement machine industry.

In addition to Marvel’s Aven­gers, current Anda­miro licenses include Nickelo­deon’s Sponge­Bob Square­Pants (ViacomCBS), and Despica­ble Me and Jurassic World (NBCUniversal), along with sports brands from MLB Players Association, World Wrestling Entertainment Inc. and NFL Players Association.
“While popular brands can be an effective way to attract players to a game, it’s innovative gameplay that will keep them coming back,” Maniscalco observed. To that end, Andamiro’s new lineup of games attempt to match iconic IPs with original gameplay.

SpongeBob Pirates of Bikini Bottom is Andamiro’s new quickfire arcade pusher and operates with miniature balls instead of tokens. Players shoot those balls into a side-to-side moving treasure chest. Following a successful shot, the sequence is completed on the video screen, where a cannon fires and a bubble is put into the “bubble meter.” Ten winning shots fill the bubble meter and when that is achieved, the prize wheel spins. SpongeBob Pirates plays with collectible cards (nine in the series) and colored chips that mingle with balls on the playfield. Chips can be redeemed for tickets right at the machine.

Pirates of Bikini Bottom is Andamiro’s sixth SpongeBob arcade adaptation, which includes SpongeBob Pineapple Arcade (ret. 2020), which the company is proud to say is its best-selling product and still one of industry’s top-earning coin/card pushers. “The key to a successful SpongeBob adaptation, however, is the game itself must be compelling on its own,” Maniscalco underscored. “We are confident that Pirates of Bikini Bottom will be one of the most innovative pusher-style concepts to hit the market this year.”

Another clever adaptation puts SpongeBob in an entertaining gravity game. Introduced a year ago, Sponge­Bob Ticket Coaster challenges players to accurately time landing a ball into the opening of one of the roller coaster cars. Players experience the excitement of a Jelle’s Marble Run race, but win tickets. Ticket Coaster is packaged in an attractive two-player cabinet with two trains that circle the playfield and two cork­screw ball-drop gadgets. The player stations are positioned on opposite sides of the cabinet.

To be sure, SpongeBob commands a huge following. It is the most in-demand children’s show in the world and 47 times more popular than the average TV show, according to Guinness World Records. But SpongeBob is not only enjoyed by children, Guinness pointed out. The show first appeared on Nickelodeon in 1999, so its original fans are all adults now. For this reason, among many others, Andamiro’s Sponge­­Bob games remain popular with all ages, they note.

Making its debut at last month’s IAAPA Expo in Orlando, Fla., Avengers Infinity Stone Challenge is a quick-play, skill-based redemption game. Presented in an attractive Avengers-branded cabinet with two player positions, the newest Andamiro piece boasts intuitive gameplay that tasks players to collect six Infinity Stones to activate the Super Spin wheel. With good timing skills – pressing the button at just the right time – players can successfully drop a stone into one of three target holes on a revolving playfield to win tickets and collect stones. Specially crafted Infinity Gauntlets that keep score are central fixtures of each player side. Avengers Infinity Stone Challenge offers plenty of ways for players to win tickets.

Also new in Andamiro’s licensed lineup is Jurassic World MINI, the short-track version of the company’s popular muscle-memory game of the same name. This new version is only 74 inches deep, compared with the original game’s 119-inch depth, making it almost 4 ft. shorter. It began shipping to arcades this past summer. In another summertime launch, Bobblehead Baseball pits arcade gamers against the bobble-headed avatars of MLB’s biggest stars. It’s Andamiro’s newest video redemption game and first licensed title from MLB Players Inc., a subsidiary of the MLBPA.

To learn more about Andamiro and its latest games, visit the U.S. office’s website at www.andamiro.com.