In Search of the New School Gameroom

Our Digital Addiction & Its Adverse Affect on FEC Spending

Since the dawn of the 21st century, 56K dial-up speeds, along with the rise of Windows 98, desktop browser integration, AOL and broadband access, all started to change everything. This was then followed by the Internet being joined by social media and the smartphone to give rise to what is known as the Triple Revolution.

As a result, we find that there is a strong correlation between our growing digital compulsion (and inability to extricate ourselves from our at-home and mobile screens) and declining attendance and spending on out-of-home entertainment.

This decline is across the board, at all type of venues and on all types of entertainment, both in our local communities, as well as on trips and vacations. Unfortunately, this also includes spending on games in gamerooms. 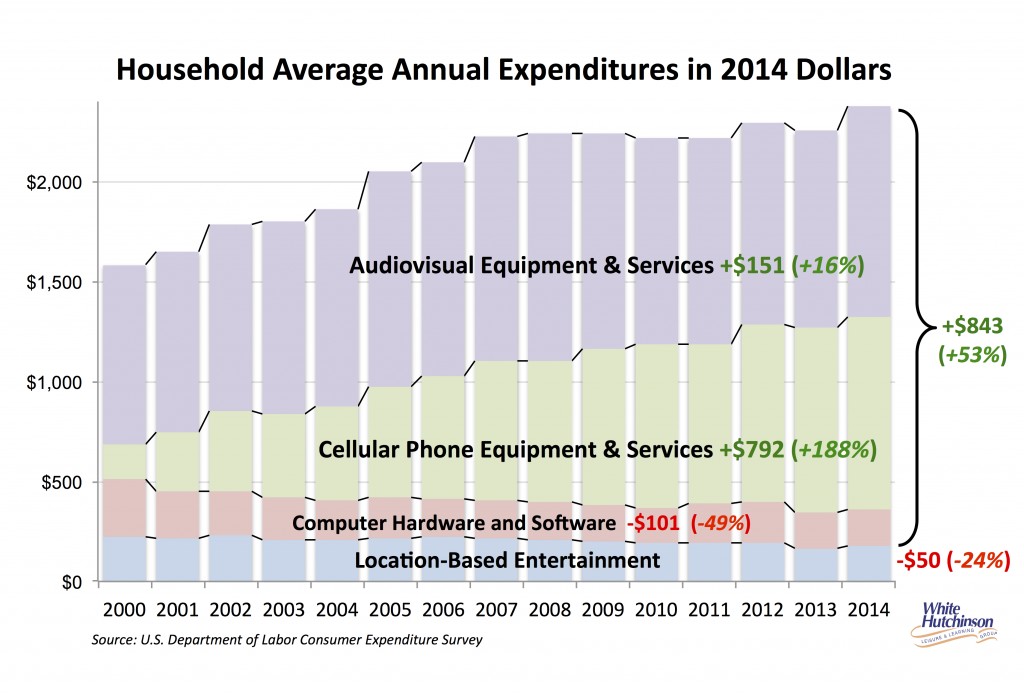 It’s a zero sum game when it comes to our discretionary leisure time. Americans have an average of 5.3 hours of leisure time a day, which has remained unchanged over at least the past three decades, plus or minus a few minutes each year. So when digital technology consumes our leisure time, it crowds out and displaces what we used to do and spend on real world leisure and entertainment activities.

Also back then, households spent one-quarter percent (0.24%) of all their total spending on community-based entertainment where most gameroom spending takes place. In 2014, it had declined to 0.19%. During the same period of time, households almost doubled their share of all spending on digital entertainment equipment, services and software from 2.0% to 3.9% When it comes to average household spending on entertainment during trips and vacations, it’s down by more than one-quarter (28%) since the turn of the century. A major factor in this decline is that people are staying home more (with their digital entertainment options) and taking less vacation days. Data from the U.S. Travel Association show Americans took 20.3 vacation days annually from 1976 to 2000. From 2001 to 2013 there was a steep decline to 16 days, 4.3 less days a year, almost an entire week of less vacation.

Demographic changes are also having a disruptive impact on the out-of-home entertainment landscape. There is a long-term trend of singles and childless couples increasing as a percentage of the total population, while the percentage of families with children is on the decline. In 2014, childless people living alone were the most common type of household (28%) followed by married couples without children under age 18 at home.
And the middle and lower classes continue to be economically challenged by growing income and wealth inequality. We are seeing the greatest decline in LBE participation and spending among the middle and lower income classes. The decline among the higher socioeconomic classes has been far less.

Our company’s national surveys show that American adults have a high participation rate of playing games in commercial gamerooms located in LBEs. However, as fewer and fewer consumers visit (or visit less frequently, and as a result spend less of their money at FECs and other entertainment venues), overall gameroom revenues are also being disrupted.

The impact is not the only growing threat to gamerooms. The changes to participation, spending and demographics has given birth to a New School entertainment venue that is growing in market share and slowly displacing the old school models, including the traditional FEC model. And few if any of these New School business models include gamerooms as part of their mix. These New School venues are focused on being adult-oriented, upscale social gathering places. Here, the socialization centers foremost around great food and beverage and secondarily around classic, old-school, physically-interactive social games such bowling, bocce ball, shuffleboard, ping pong, billiards, even social golf at driving ranges. These New School venues are a game changing evolution to the traditional family entertainment center business model, as they:

• Target the higher socioeconomic rather than the middle class market

Lucky Strike probably started this evolutionary trend to the back in 2003. They’ve been followed by variations such as Pinstripes, Punch Bowl Social, Splitsville, Kings, Top Golf, Namco Entertainment’s venture into the genre, Level 257, plus many other similar concepts by small chains and independents. With the exception of a few vintage video games thrown into the mix such as at Punch Bowl Social, only Level 257 has a gameroom, but it is one that breaks the conventional paradigm about gamerooms (more about that later).

I believe there is a very clear reason why gamerooms are not part of the mix in these New School social eat-drink-play venues. Their exclusion is due to the venues’ focus on being a destination where friends and family can come together to have a great group social experience. The issue is that most games are not designed for group socialization. Most are single-player games. Some are two-player. There are a few multiplayer social games for four or more people (such Super Trivia, Pac-Man Battle Royale, Pac-Man Smash Cabinet), multi-player sit down drivers (which have a predominate male appeal) and the new 6-player Ocean King 2 Golden Legend, but that’s about it. Social group games are very limited in number and not enough to create a critical mass for a gameroom.

Offering single- and two-player games in a facility that wants to offer a group social experience just will not cut the mustard in these New School social gathering venues, and that’s a primarily why you won’t find gamerooms in them. Game manufacturers appear to be stuck in an old school paradigm and will continue to loose market share until they rethink what their games need to offer to match the type of experiences New School entertainment venues are focused on offering.

Another issue with most games is they’re still designed to look like they belong at a carnival. There certainly is  a place for that design within the traditional FEC, but they don’t fit in an adult-oriented facility with upscale décor.
Namco Entertainment’s Level 257 has taken an entirely new direction of integrating a gameroom into an upscale New School social gathering venue. First there are no redemption games. Second, the game play is priced by the hour. Third, they have lots of group games. And fourth, most of the games are located in an upscale setting that looks more like a library rather than a carnivalish gameroom with flashing lights and other distractions.

Yes, digital disruption is negatively affecting the location-based entertainment industry. Out of the disruption, a New School business model of leisure venue –– the social eat-drink-play gathering place –– is emerging to get people out of their digital entertainment cocoons at home and on their various social media screens. Game manufacturers need to recognize how the location-based leisure industry is evolving in order to stay relevant to venue developers and their guests. If they do so, gamerooms can be part of the mix in the New School eat-drink-play social gathering place business model.