Trending
You are at:Home»Featured»Allstar Distributing – June 2018

The Allstars at Allstar!

Popular Toys, Licenses Have Made the Company an Industry Force

Before becoming a machine manufacturer and redemption merchandiser, Myrna Dorfman got into the business world as a distributor of popcorn machines — a small company she ran out of her house. “I’d sell anywhere people drank,” she said. “The bars liked popcorn because it made people thirsty.” Myrna Dorfman, president of Allstar Vending, started the company in the basement of her home in 1989.

But in 1989, the popcorn trade started to fizzle out. That’s when she heard about machines that sold sports trading cards for 25-50 cents a card. “They were the rage at the time,” Dorfman recalled.

With that in mind, she founded Allstar Distributing, which sold the trading card vending machines. Early on, she still worked out of her home’s basement, later moving to a 6,000-square-foot facility.

For the past 20 years, she has been in a 20,000-square-foot space with offices, a warehouse and a showroom located in Pointe-Claire, Quebec, Canada — on the Island of Montreal (or Île de Montréal to the French-speaking locals).

It was a trip to a Brooklyn-based manufacturer of trading card machines that led to that growth. On that visit with the now-defunct Steiner Manufacturing, she saw they sold flat vending machines with stickers and tattoos.

“Now I could make money selling stickers and tattoos!” Dorfman thought. Shortly after, she decided to start manufacturing her own machines.

“The rest is history,” she said. “We became a driving force in the industry and started competing with every company that was making stickers and tattoos.” The brand new Fingerlings are products Allstar is excited about.

Then, Allstar Vending started manufacturing toys and licensed products — something that was a success then and remains so today. The company hired a licensing agent to secure some big-name brands.
“Pokemon was one of the best licenses we ever had,” Dorfman said. Others have included Universal Studios (Secret Life of Pets), Once Upon A Zombie, Disney, WWE, Sony (Smurfs), Moose Enterprises (Trash Pack), Cut the Rope and The Pink Panther. Allstar also holds a global license for both vending and redemption.

“Within the last couple of years, we’ve added redemption to all our licenses,” Dorfman explained of their entry into that segment a few years ago at the request of some redemption companies. Currently held licenses include: American Greetings (Care Bears and Madballs), Universal Studios (Despicable Me, Trolls and Dinotrux), NHL and their newest — Fingerlings.

The Fingerlings brand is one they’d been excitedly anticipating. In February, it won the Toy of the Year award at the Toy Association’s Annual Awards Gala, also winning the Collectible of the Year award. The first product Allstar is selling under that new arrangement is a Fingerlings bracelet, which came in around early April. It will be followed by more, including pieces originating from three new shows on the brand’s Fingerling Entertainment YouTube channel.

“We’re really excited about that,” said Sharon Shlien, Allstar’s vice president and Jill-of-all-trades who leads sales, product development, licensing and marketing. With Fingerlings joining the other strong licenses, things are really busy at Allstar. “At any given time, we usually have one really hot-selling license,” Shlien continued.

Generic items are popular, too. Terror Tattoos, Splat Mix and fidget spinners are a couple of key generics at the moment. Squishimals is a new one that Allstar is also pumped up about. Overall, Shlien said, redemption toys and capsule toys make up 75 percent of their revenue today. The remaining 25 percent is mostly stickers and tattoos. Known for their custom vending machine, Allstar still makes it, but not like they used to.

“Machines sales have died down in the last five years or so,” she said. “There are so many used machines out there nowadays.”

They also have bulk vending, selling candy, peanuts and gum, though most of their food sales are in Canada. Dorfman said her son, Adam, was instrumental in starting that side of the business. (No longer with the company, Adam did take over Dorfman’s position as president for a couple of years starting in 2009.)

The biggest challenge Allstar Vending faces, Shlien said, is finding items that satisfy the needs of both the Canadian and U.S. markets. “We have to produce products worthy of the $2 Canadian dollar coin, but affordable for the U.S. market for a 50-cent vend,” she said. “The cost of goods has gone up, too, so that makes it trickier.”

Allstar roughly splits their U.S.-Canadian markets fairly evenly at about 50 percent U.S. to and 40 percent Canada. The remaining 10 percent of their business is international. Another challenge the company faces is also related to their location and the markets they serve, a common misconception. Sometimes, Shlien said, American companies are hesitant to order from Allstar because it’s located in Canada. However, they have a U.S. warehouse and domestic shipping rates that are the same as everyone else, she said. In fact, Dorfman added, they actually can ship some items under a special UPS rate because they ship so often.

The U.S. warehouse, located in New York, is where items are coming from — not Canada. “It’s as if they’re ordering from an American company,” Shlien explained. 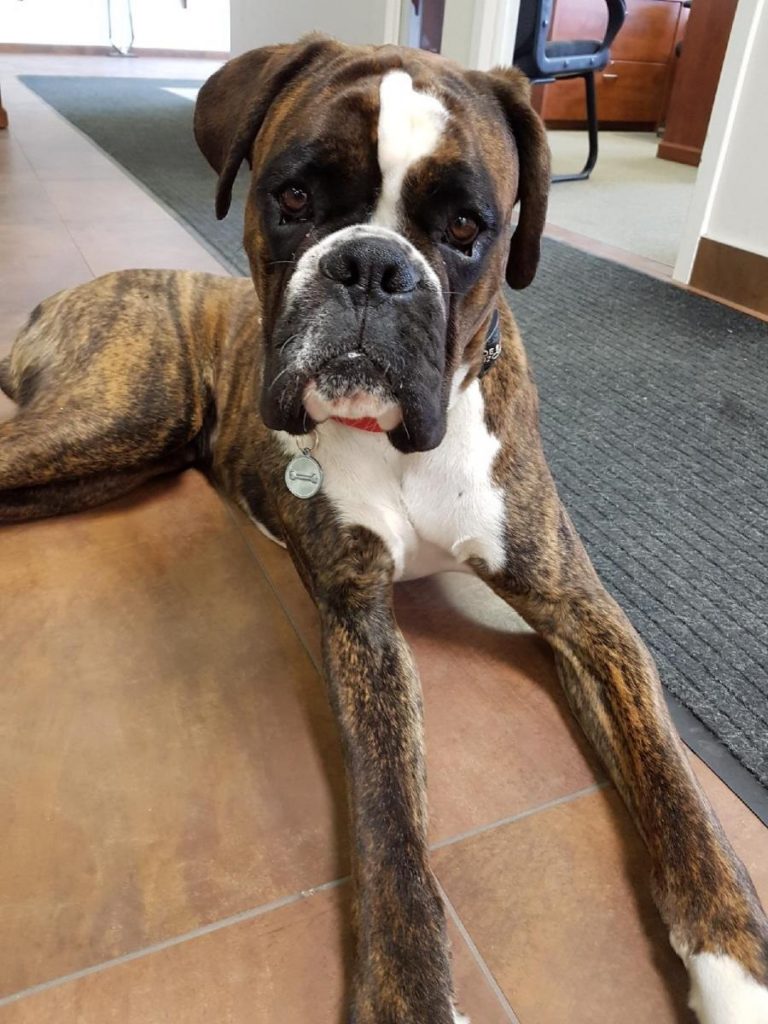 Bo the dog is known as the office mascot, hug giver and stress reliever at Allstar Vending.

As you’d expect, Allstar takes those orders online as well as by phone (the ratio is about 50/50) with Shlien noting, “Obviously we get way more online orders than we used to,” she said. “But it’s more of an old-school base as many customers like having discussions.”

At the end of the day, whatever the toy or product, it’s all about producing things that make kids smile. That’s one thing that has been a constant throughout the company’s almost 30 years in business.

“Buying something out of a vending machine is an impulse buy,” Dorfman said. “I remember years ago when we used to have our own route — sticker machines in Pizza Huts across Canada. “Kids asked their parents to go there not for the pizza, but because they wanted to put money in our machines to get a sticker or tattoo.”

To see the latest from Allstar Vending, visit them at www.allstarvending.com.